Preserving the planet is a responsibility that we take very seriously. In order to reduce our carbon footprint by any means possible, all of our servers are powered by 100% green energy.

Traditional data centers are wasting energy and polluting the planet

The energy footprint of the IT sector is estimated at 7% of the total global electricity consumption, According to Greenpeace International. Widely cited forecasts suggest that the total electricity demand will reach 21% of the projected total demand. Usage will undoubtedly continue to increase, with some analysts predicting that the amount of energy used will double as quickly as every four years.

Researchers from MIT have reported that the Cloud now has a greater carbon footprint than the airline industry. Digital technologies are currently responsible for 4% of all global greenhouse gas emissions, thereby exceeding emissions from commercial flights (about 2.4%) and other existential activities that fuel our global economy.

A single data center can consume the equivalent of electricity for 50,000 homes. At 200 terawatt hours (TWh) annually, data centers collectively consume more than the national energy consumption of some countries like the United Kingdom.

Most data centers in the U.S. are powered by coal power, which is very polluting and bad for the planet. Nearly 40% of the total operating costs of data centers come from the energy needed to power and cool the enormous amount of equipment it requires to function. But unfortunately, only 8% of new data centers use green energy to power their operations.

Our data centers are powered by 100% renewable energy

Our main data center is powered by hydroelectricity from Hydro-Quebec, one of the lowest carbon emitters in the world. It is located in Beauharnois, near the Montreal region in Quebec, Canada. The data center is built just 300 meters from a hydroelectric dam, meaning our servers are powered by the renewable energy generated there.

With vast amounts of cheap and renewable electricity generated from hydro dams, Quebec is seeing more and more tech giants setting up power-hungry data centers in the Canadian province. There is an abundance of renewable and clean power available in Montreal that is offered inexpensively through local power utilities for data center providers. But it’s not just the low cost of energy that makes Montreal shine – it’s the amount of energy that data center providers need. With a cool climate, the amount of energy spent cooling a data center in Montreal is far less than in a warmer climate.

Hydro-Quebec was nationalized in 1944 and 1963 when the Quebec government bought out the private companies and merged them into a government corporation whose sole shareholder is the Quebec government. It means that the profit of the company is funding public services such as education and free health care, which is better than enriching the owners of a private corporation. As of today, all of the electricity in Quebec is coming from renewable hydroelectricity.

Scale also plays a role in energy consumption. The Dutch government replaced 60 data centers with 4 large ones and the result was a 50% reduction in power usage. The data center in Beauharnois is one of the largest in the world, making it the perfect candidate for energy-efficient hyperscaling. Computing workloads in hyperscale data centers are almost 6 times more water-efficient than others. On average, one server in a hyperscale center is said to be able to replace 3.75 servers in a conventional center. According to a Lawrence Berkeley National Laboratory report, if the entire Cloud shifted to hyperscale facilities, energy usage might drop as much as 25%

In Europe, a solar power plant is supplying our servers in France with renewable energy.

Using the most environmentally efficient data centers in the world

A key metric to consider when calculating energy usage is the Power Usage Effectiveness (PUE) value. Lower is better – a PUE value of 1.0 indicates that all energy consumed by a data center is used to power actual computing devices, a.k.a IT infrastructure. 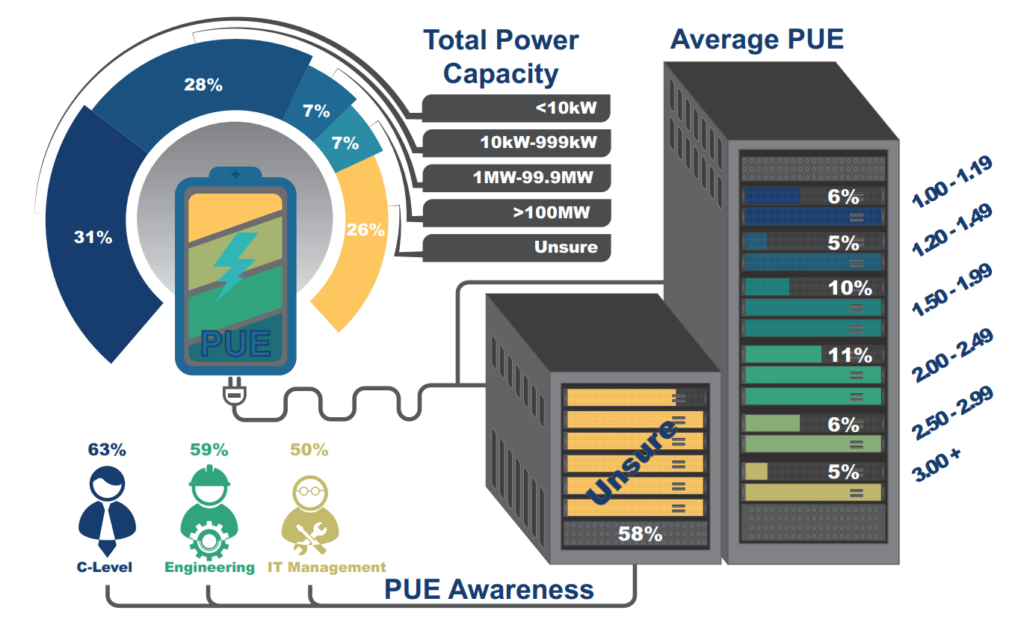 Our Canadian data center has reached a PUE rating of 1.08, making it one of the most environmentally efficient in the world. Less than 2% of the data centers in the world were able to reach this level of efficiency. This indicator supports the efforts to effectively eliminate air conditioning and cut its energy bill in half by combining optimal air flow management inside the building with an exclusive water cooling system for its servers, which are assembled in-house­.

In Europe, our servers are located in France which is also one of the lowest-emission countries for data centers. Climatiq has designed a tool to rank data centers across more than 60 locations around the world according to their emission intensity. France ranks #3 and Canada is #5.

Many data centers are fitted with ineffective air conditioning units that are wasting energy. Outside air and the optimization of airflow is one method used by some data centers to carry heat away from servers, particularly in countries with more temperate climates. Even more efficient than this, a technique we use at our data center is water cooling.

Liquid cooling runs through the data center and over the servers in order to cool the processors. The liquid is carried by heat exchangers positioned on top of processors and any other components that emit a lot of heat. Water has a greater heat-carrying capacity than air, making it a more effective way of cooling servers and removing up to 70% of the heat generated by servers.

By solely using variable frequency fans and water pumps, data centers can cut electricity usage in half. Although air conditioning might seem like the easiest option, it’s worth putting in the time and money investment and considering a more environmentally friendly, sustainable solution.

On the water consumption front, it’s important to consider that data centers are among the top-ten water-consuming industries in the US, according to credible research.

The Water Usage Effectiveness (WUE) of our data center is at 0.26 liters/kWh, while the industry average is at 1.8. Our water consumption is the equivalent of a glass of water to cool down a server during 10 hours of use, which stands out thanks to its closed-circuit system that limits fluids waste, but also thanks to the use of dry coolers, and the absence of air conditioning in its servers’ rooms.

Another big problem in the data center industry is hardware waste. According to research, 47% of data centers replace their servers every 1-3 years on average with another 28% every 4-5 years. At NGNM, we keep our servers for at least 10 years.

Electronic waste is another byproduct of data center refresh activity. Per a recent EPA report, E-Waste overall accounts for 2% of solid waste and 70% of toxic waste.

E-Waste is created when data centers dispose of their server, storage, and networking equipment. An estimated 20 to 50 million metric tonnes of E-Waste is disposed of globally every year depositing heavy metals and other hazardous waste into our landfills. If measures are not taken E-Waste is expected to grow 8% each year.

Metals contained in electronic waste take millennia to decay because they are often toxic and sometimes even contain radioactive elements. Historian Nathan Ensmenger writes that a single desktop computer requires 240 kilograms of fossil fuels, 22 kilograms of chemicals, and 1,500 kilograms of water to manufacture. The servers that fill the halls of data centers are dense, specialized assets, with some units valued in the tens of thousands of U.S. dollars. Cables, batteries, uninterruptible power supplies (UPS), air conditioners (CRACs and CRAHs), power distribution units (PDUs), and transformers are also periodically decommissioned and disposed of, when warranties expire and units fail to perform with the high standards of reliability and redundancy.

At NGNM, we manage to extend the lifetime of our servers with a simple rotation plan. When we upgrade the hardware of one of our servers, we always donate the old hardware to another website in our network. So instead of replacing the server, we rotate it to another place in our network, which means that the servers we are disposing of are always the oldest ones – the servers that have been rotated from the most resource-intensive site to the smaller websites until it is too old to host anything.

French Regulatory Authority ARCEP, and the French Agency for Ecological Transition, ADEME, both estimate that 78% of the Cloud carbon footprint comes from the manufacturing of hardware. Our data center’s ability to refurbish and dismantle 100% of its components results in extending its lifecycle for constant innovation.

When a server has finished its internal life cycle of a minimum of 10 years in our network, the hardware components are recycled by our data center. The Beauharnois site houses one of the group’s two production plants. From the design and manufacture of servers to the reuse of components, which extends their lifespan to between 5 and 15 years, our data center masters the entire value chain and contributes to the dynamism of a growing cloud computing industry in the Montreal region.

Our data center’s parent company, along with other major European cloud and data center operators, including AWS, Google, and Equinix, as well as smaller and national providers, have signed up for an agreement to become climate neutral by 2030.

The Climate Neutral Data Centre Pact is backed by 17 industry bodies, and sets targets for efficiency and the use of green energy, as well as making data centers into a circular economy. It follows the Europan Union’s announcement of a Green Deal at the end of 2019, and commits the industry to reach carbon neutrality by 2030. Within the pact, the providers have all promised to increase and measure their efficiency, to use 100 percent renewable energy, to address water efficiency and take part in a circular economy to repair and recycle servers, as well as reusing waste heat where possible. Among other details, the group also promises to use the PUE (power usage effectiveness) standard – but also to address something that’s been on the industry’s to-do list for a long while: to look at creating a new metric to replace the aging PUE standard.

Under the Pact, all facilities must use 75 percent renewable or carbon-free energy by 2025, and be 100 percent carbon-free by 2030.

Efficiency targets are a little more complicated: operators have agreed that by the start of 2025, all new data centers in cool climates will meet an annual PUE target of 1.3 – however, this only applies if they are operating at full capacity, because the PUE metric doesn’t work for partially loaded facilities. Facilities in warm climates will only have to meet a PUE of 1.4, because they must use energy to cool their IT servers. Existing legacy data centers have worse PUEs, and they will have until 2030 to meet these targets.

For water use, the Pact acknowledges that the Water Usage Effectiveness (WUE) metric still needs work, so the group have promised to create targets by 2022 using WUE “or another water conservation metric”, which new data centers must meet by 2025, and existing ones by 2030.

Targets for recycling and repairing servers are also emerging: the Pact promises signatories will assess all servers for reuse, repair or recycling – and a target percentage will be agreed by 2025.